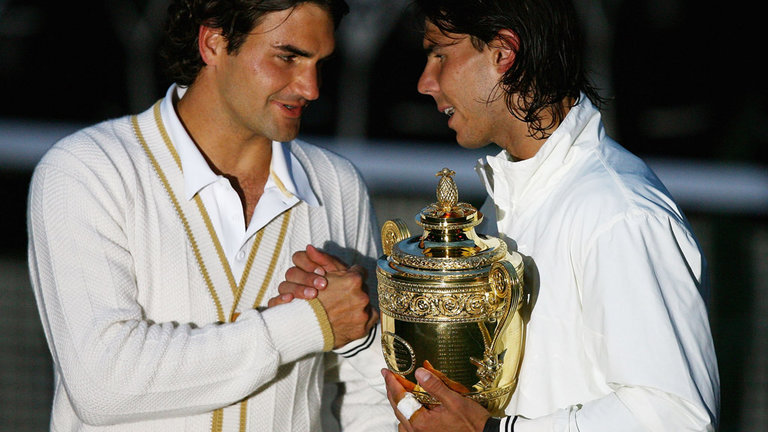 Roger Federer Vs Rafael Nadal is arguably the greatest rivalry in all of sports. With both Roger and Rafa getting older by the day, every Fedal feels like a treat these days! Having witnessed three incredible matchups in 2017 already, these rare sporting events have been super-hyped in media. Even more in my mind ;)

Thanks to Kaggle Datasets, i came across a dataset of all ATP matches from 1968-2016. - Roger’s 1345 matches pitted against Rafa’s 1001. I’ve analyzed both players’ performances over the years, on different surfaces, and against each other! 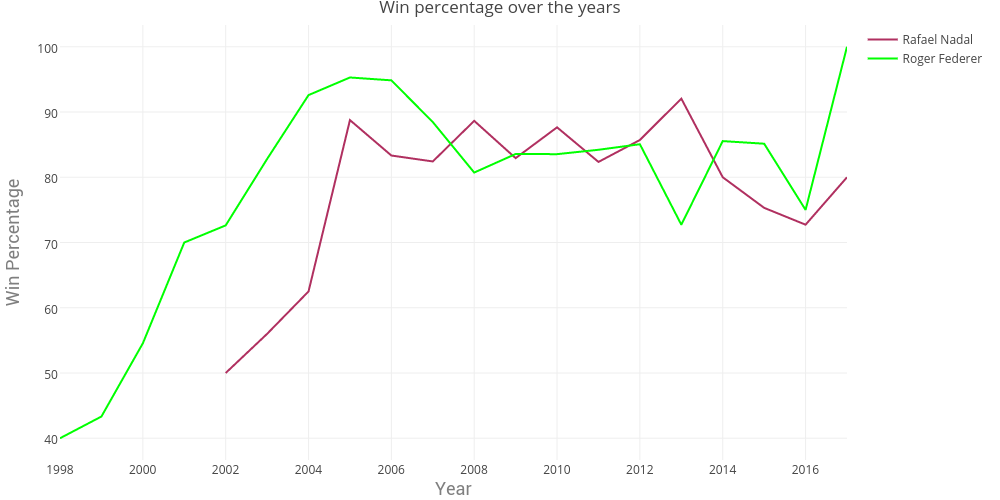 It’s kinda funny how the minimum value on y-axis is 40% :) Anyways, it’s interesting to note the rise of Rafa was much steeper than Roger, then stagnated till 2014 at around 80-90%. Post 2014, both players have been a little unpredictable, facing upsets in Grand Slams.

Players’ Seeds over the years 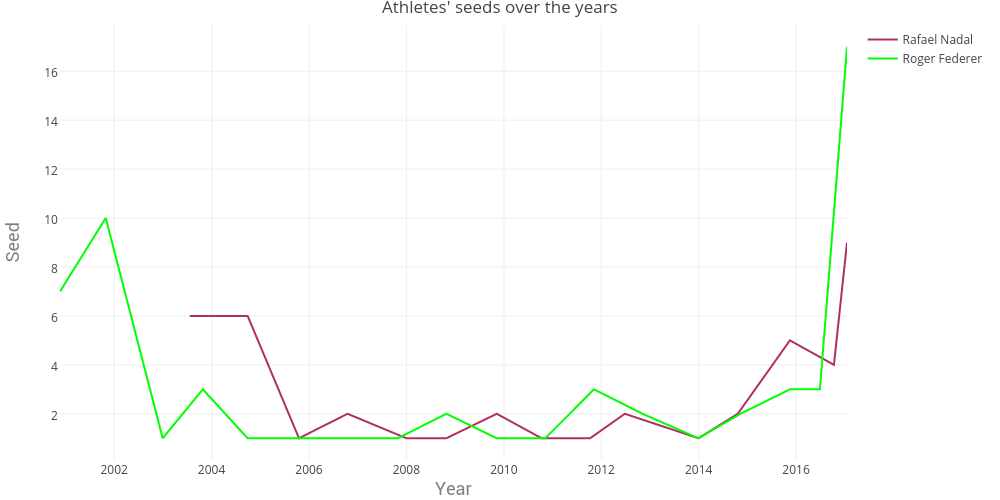 These seeds as per the year-end dates(on which the seeds were updated). As expected, Federer maintains No.1 for a long 5-6 years and Nadal trails at No.2, creeping up a couple of times as well.

Now lets look at both players’ performance on the different surfaces. King of Clay versus Emperor of Grass! 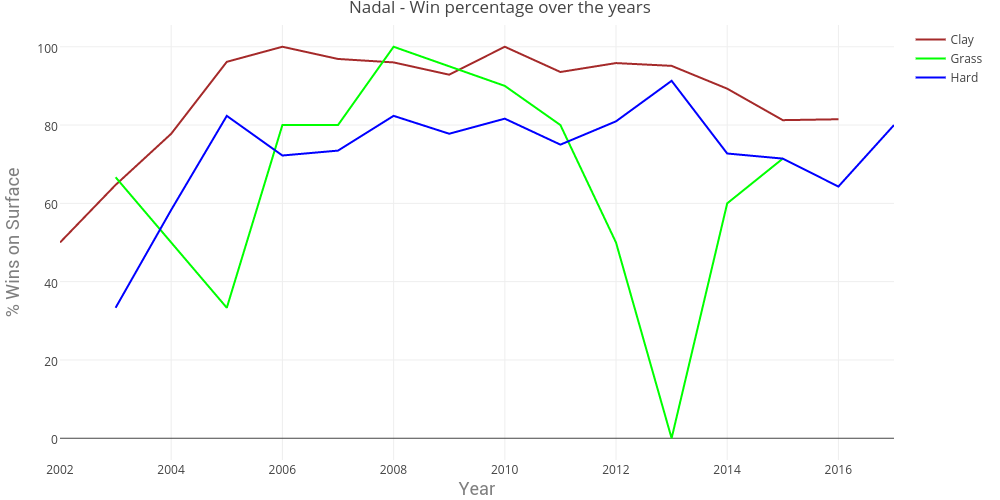 Just look at the red line hovering around the 100% mark – Mind blown. Interesting note – the 2014 dip on Grass is because of the first round exit in Wimbledon ‘14, Steve Darcis the spoilsport! Similar pre-quarters exit in 2014 by Nick Kyrgios. 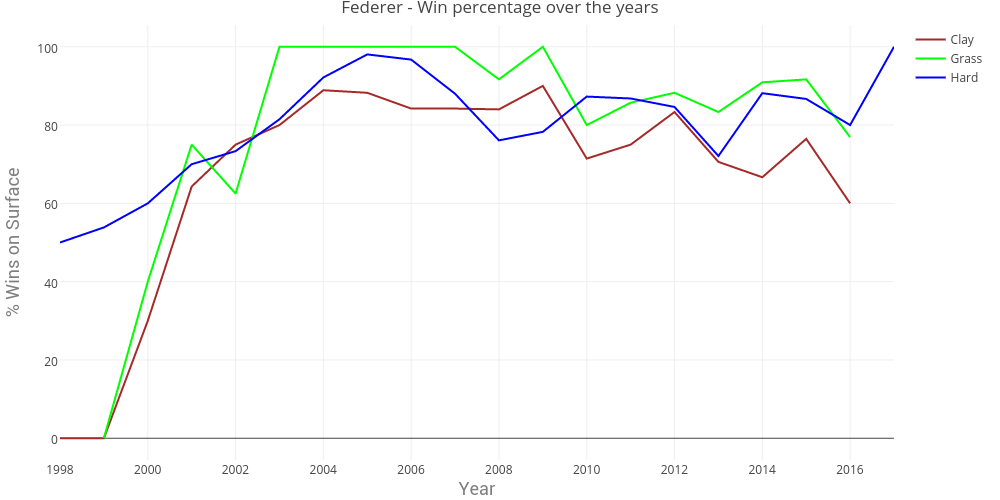 Wonder which tournaments both the players have dominated? A look at the top win ratios for different tourneys(at least 10 matches must be played by the player at that tourney).

Who has troubled Roger the most?!

Rafa’s nemeses - Clearly, Rafa doesn’t have as many nemeses as Roger does!

To analyze the dominance of a win, i’ve analysed the percentage of straight set wins on the different surfaces. 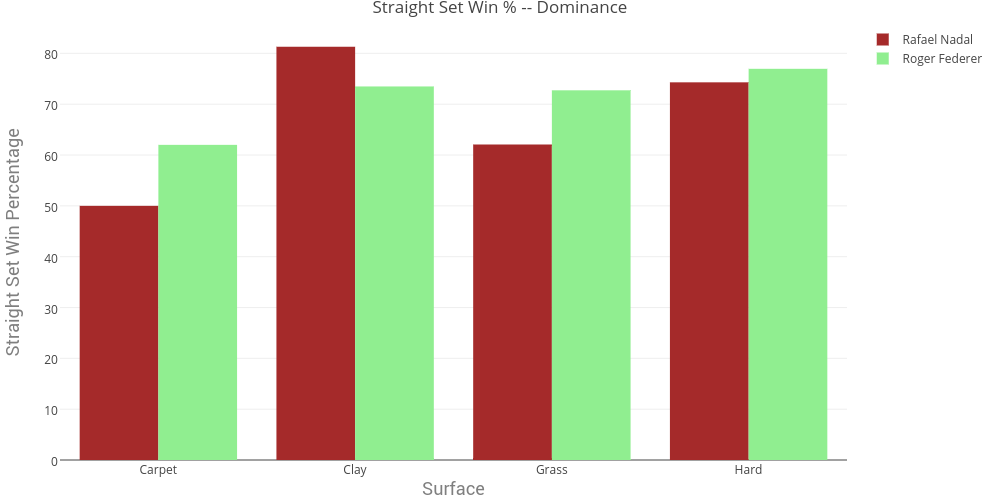 Except clay, Federer leads Nadal in all surfaces. What is surprising to see is, even though Federer is the best on Grass, he is most dominant on Hard Courts.

It’s known that Federer has an impeccable serve, while Rafa relies more on his groundstrokes. But what about double faults, %points won on second serve and break points saved?! 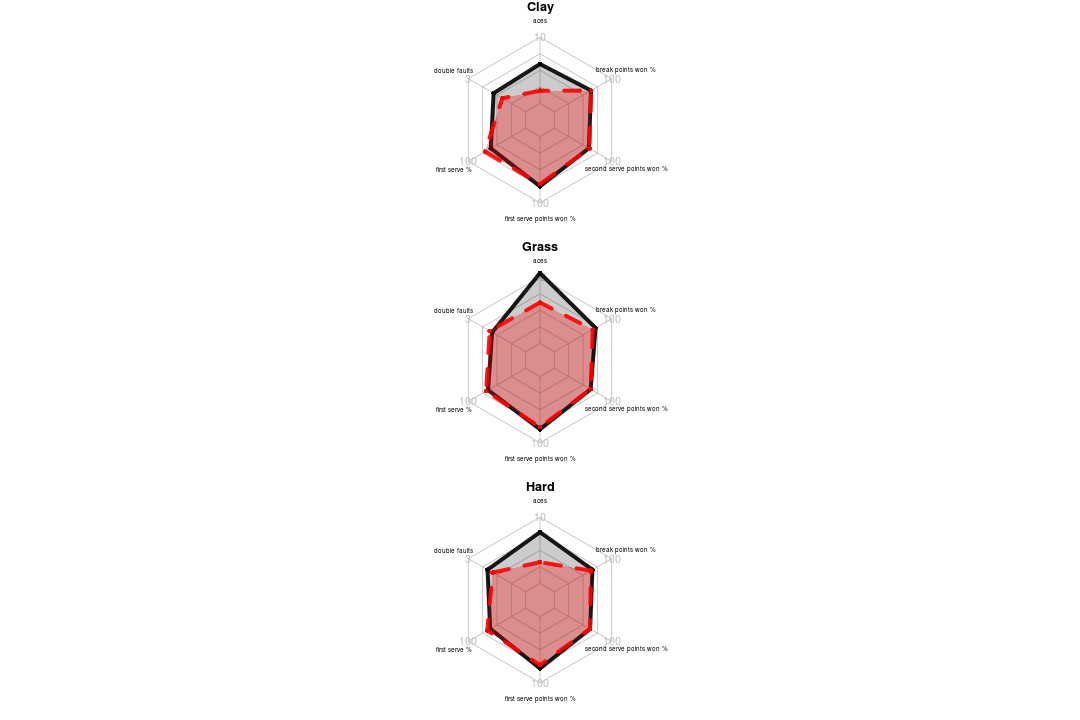 As visible from the radar charts, Nadal serves far less aces than Federer, though both shoot them up on the grass courts. Perhaps as a result, Nadal puts in fewer double faults on both clay and hard, almost equal on grass. Nadal’s overall first serve percentage is also marginally higher than Federer’s, though Federer leads in the rest of the metrics(very slightly).

Note – the maximum “ace” value on the charts is 10, and maximum “double faults” is 3. The other metrics are percentages(maximum is 100).

Federer-Nadal have played 37 ties, of which Rafa has come out winning 23 of the times. But this stat shouldn’t bias us towards Rafael – First have a look at the Head-to-Head Fedal on different surfaces.

Clearly, they have played a lot more matches on clay, compared to grass – which gave Rafa the massive lead!

My hypothesis – Nadal didn’t advance as much on grass to play with Federer, resulting in fewer Fedal clashes on grass. This suggests, Nadal is worse on grass than Federer is on clay. Just a hypothesis though :)

Lets have a look at Fedal clashes over the years, over different surfaces – 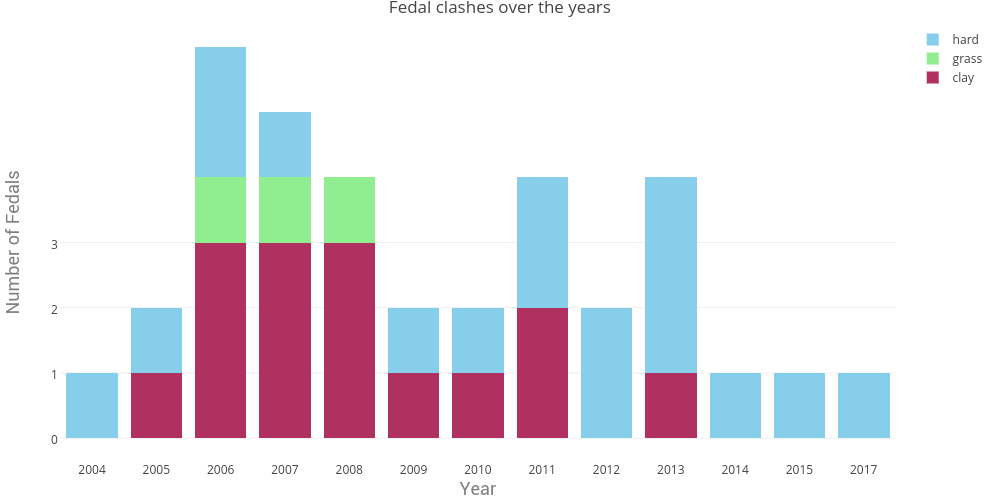 Now, lets have a look at the upsets (Federer’s wins on clay, and Rafa’s wins on grass)

Federer’s wins on Clay against Nadal – Not in a Grand Slam though :p

Nadal’s win on Grass against Fed – Just one. The Legend. The Epic :)

Given the past head-to-heads, Nadal has the best chances to beat Roger on clay. He’s beaten him five times in the Roland-Garros finals, thrice in Monte Carlo and twice in Rome. With Federer coming back only in the French Open, that might be the only chance for Rafa this year.

So that’s that. Let me know if you liked it!