Can you beat Federer?!

This weekend, I came across a puzzle on FiveThirtyEight - Can you figure out How to Beat Roger Federer at Wimbledon?! I just had to dive in! Now this challenge had Monday morning as a deadline, so I decided to pull an all-nighter(gave up by 5 in the morning -_-)! Little did I know, it took me 2 more days to completely understand the problem. 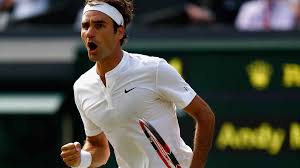 So, the problem states that I’m playing Federer, in his prime in the Wimbledon Championship Finals, and I have the liberty to start the match at any score of my choice. I have a 1% chance of winning a point against Federer. I have to decide which point should I start the match and what would be the probability of me winning the match.

Now, at first glance, the answer is Match Point, two sets to love… but I have to prove it mathematically/computationally.

My initial approach was to code the tennis match and then iterate over the possible scores to evaluate the best score and probability. I decided to use Wimbledon 2008 Finals statistics to get the serve points and receiving points statistics, thanks to Tennis Abstract. When I was through with coding a tennis match simulation of sorts, I hit a dead end. And then hit the realization that I should have done a little research on this.

I came across an excellent research paper, Forecasting the winner of a tennis match, which highlighted the key areas I needed to concentrate on. Ideally, this is not a simulation problem, rather one from Combinatrics. To win a game, I need to win 4 points – so the probability can be easily calculated.

Here p is the probability of me winning a point against Federer, assumed to be 0.01.

Thus, the probability to win a set and therefore, a match can similarly be calculated. However, as described in the question, we need to decide the starting score, thus the scores need to be iterated over.

Having started work on simulating the match, I decided to verify my results with a measured simulation. So, I’m keeping Federer at - Zero Sets, Zero Games, Zero Points, while I vary my score over the first three sets. For each score, I’m testing over Ten Thousand iterations to have a big enough sample. In the simulation, I’ve calculated different probabilities for my service and return games - based on Federer’s statistics from the ‘08 final. For each iteration, I pick a random number and if it’s greater than 0.99(plus minus the service/return factor), I win a point, and thus the match progresses. 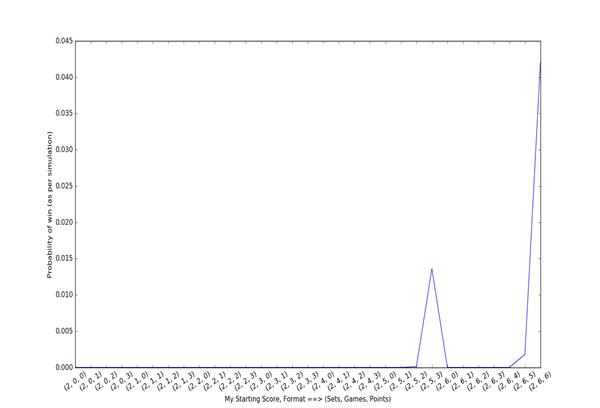 Clearly the graph shoots up at Match Point, two sets up – indicating that I’ll win the match 140 times out of the 10K trials. The interesting thing to see is that it peaks again in the tie-break when I’m 6-0 up. This is because in the tie-break, I would have six match points to play with, while at 5-0,40-0 I’d have only 3 match points. The script for the simulation can be found here.

Yeah, so that’s pretty much it! Waiting for the results to be announced by FiveThirtyEight!

Edit : So, apparently I didn’t think through the problem carefully – the correct answer is 2 sets up, 6-0 up in third set’s tie-breaker. The probability would be around 5.85% while I’d calculated 2.97%. Here, have a look at the official solution.