If you are a regular Quoran like me, you have most likely stumbled on duplicate questions asking the same essential question.

This is a bad user experience for both writers and seekers, as the answers get fragmented across different versions of the same question. In fact, this is a problem which is very evident on other social Q&A platforms like StackOverflow. A real-world problem out there, begging AI to solve it :) 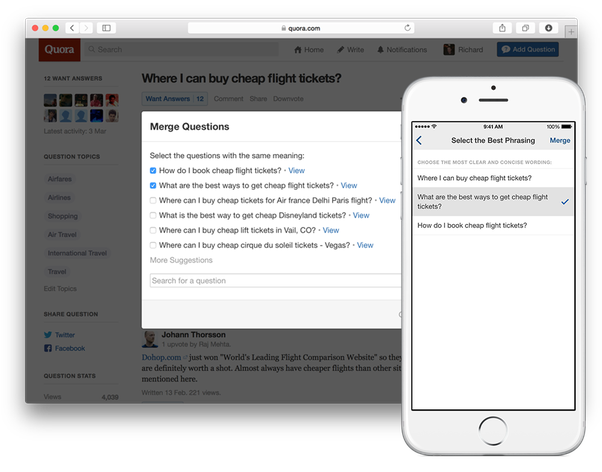 For the past month or so i’ve spent my nights cracking my skull open at this problem, along with three thousand other kagglers! It was my second serious competition in a row, it was stressful at times, but i learnt a lot overall – Landed a Top 12% position, a discussion gold medal and a couple of kernel bronze medals :)

About the problem - Quora has given an (almost) real-world dataset of question pairs, with the label of is_duplicate along with every question pair. The objective was to minimize the logloss of predictions on duplicacy in the testing dataset. There were around 400K question pairs in the training set while the testing set contained around 2.5 million pairs. Yeah, 2.5 million! A large majority of those pairs were computer-generated questions to prevent cheating, but 2 and a half million, god! I was maxing out my poor 8GB machine every other hour :(

My approach - I started off with the xgboost starter by @anokas, and built upon it gradually. My feature-set involved around 70 features which is on a rather lower range, when compared to the Top Kagglers’ approaches. My features could be broadly classified into NLP-based features, word embedding based distances and graph-based features. Let me elaborate:

NLP Features: Some very obvious text-based features are percentage of words matching between the two questions, length of the two questions, number of words, number of sentences, number of stopwords, the usual natural language stuff! I tried going ahead with tfidf scores, but that was both not very useful and computationally expensive. Instead, one of the most important features turned out to be weighted word match share, where each word’s weight is the inverse frequency of the word in the corpus(basically idf) – if i have a rare word in both the questions, they might be discussing similar topics. I also had features like cosine distance, jaccard distance, jarowinkler distance, hamming distance, and n-gram matches(shingling).

A library i used extensively for NLP tasks was Spacy, which has been developing some great functionalities lately – spacy similarity turned out to be a good feature too. Some creative ones i thought of were related to the kind of question – whether it is a “How” question or “Why” question – dependent on the first word of the sentence. Strangely, when modelling this i should’ve thought of building “last word similarity” as well, completely missed that! Named entities are a crucial key to understand the context of a question – thus common_named_entity score and common_noun_chunk score were an obvious choice. I pushed out a kernel about calculating similarity via the wordnet corpus, however wordnet fell short of spacy in terms of ease of use, speed and vocabulary size.

Word Embeddings based Distances: When doing a NLP competition, can Word2Vec be left behind! I feel like word2vec might be the coolest computer science concept i’ve read, i always get blown away by its effectiveness. Every.Single.Time.

Anyway, i had the questions mapped to 300-dimensional vectors in a Sent2Vec format, resulting in a vector for every question. Naturally, distance-based features between vectors were built – cosine, cityblock, jacard, canberra, euclidean and braycurtis. Must mention @abhishek’s scripts for the inspiration for these features. Unfortunately, i couldn’t build the real embedding layers which i could pass in to the lstm layers in keras – my RAM just wouldn’t let me. I’m getting some serious hardware, soon!

Graph Features: In an NLP competition, these graph features played quite the spoilsport! However, it was a nice reminder of how the theories of social networks might apply in datasets like Quora’s question pairs. 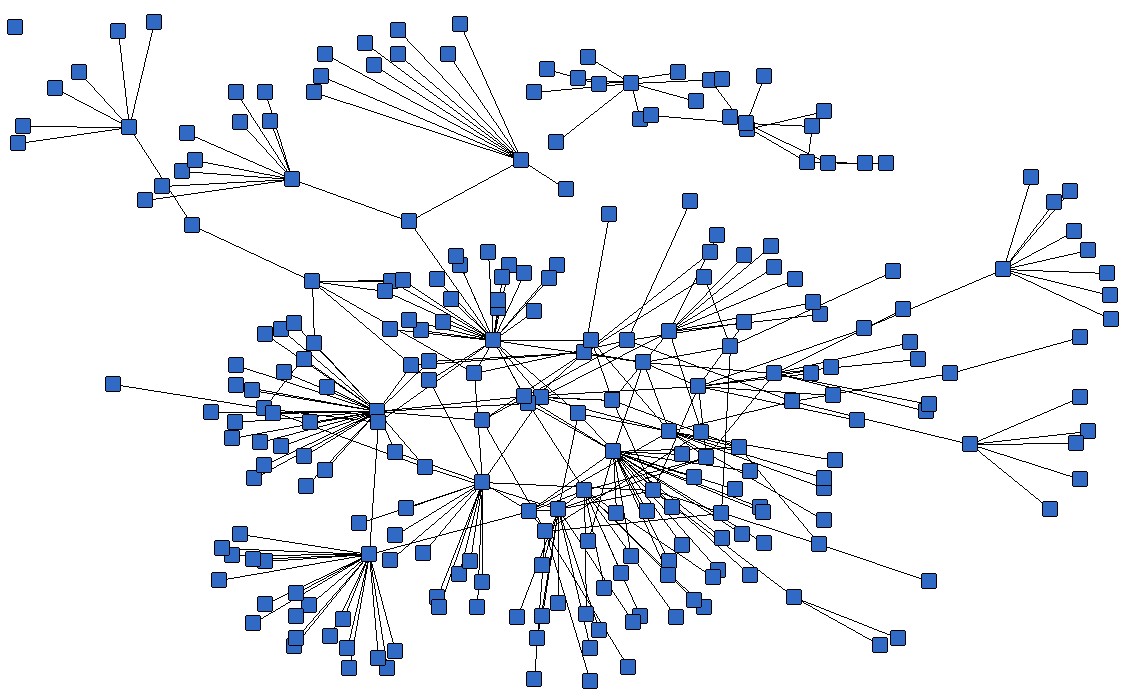 Here, every question is a node in the graph and a question pair in the dataset indicates an edge between the two nodes. We can use the graph structure of the test data as well, since we’re not considering the is_duplicate label anywhere – Those 2 million edges contributed a whole lot to the graph! There were heated discussions between kagglers on whether the graph-based features are supposedly “magic features”, which should be released to level the playing field. Anyway, all of these features gave significant boosts to most models:

Transitivity Magic - Continuing on the graph structure, modelling transitivity between the questions was an obvious approach. For eg. if Q1 is similar to Q2 and Q2 is similar to Q3, it implies Q1 is similar to Q3 more often than not(as per our dataset). This was one of the features i had begun building but left it midway, a costly mistake. Many top solutions used this feature in some form or another, a simpler version was to average probabilities of duplicacy between every question and its counterpart’s neighbors. 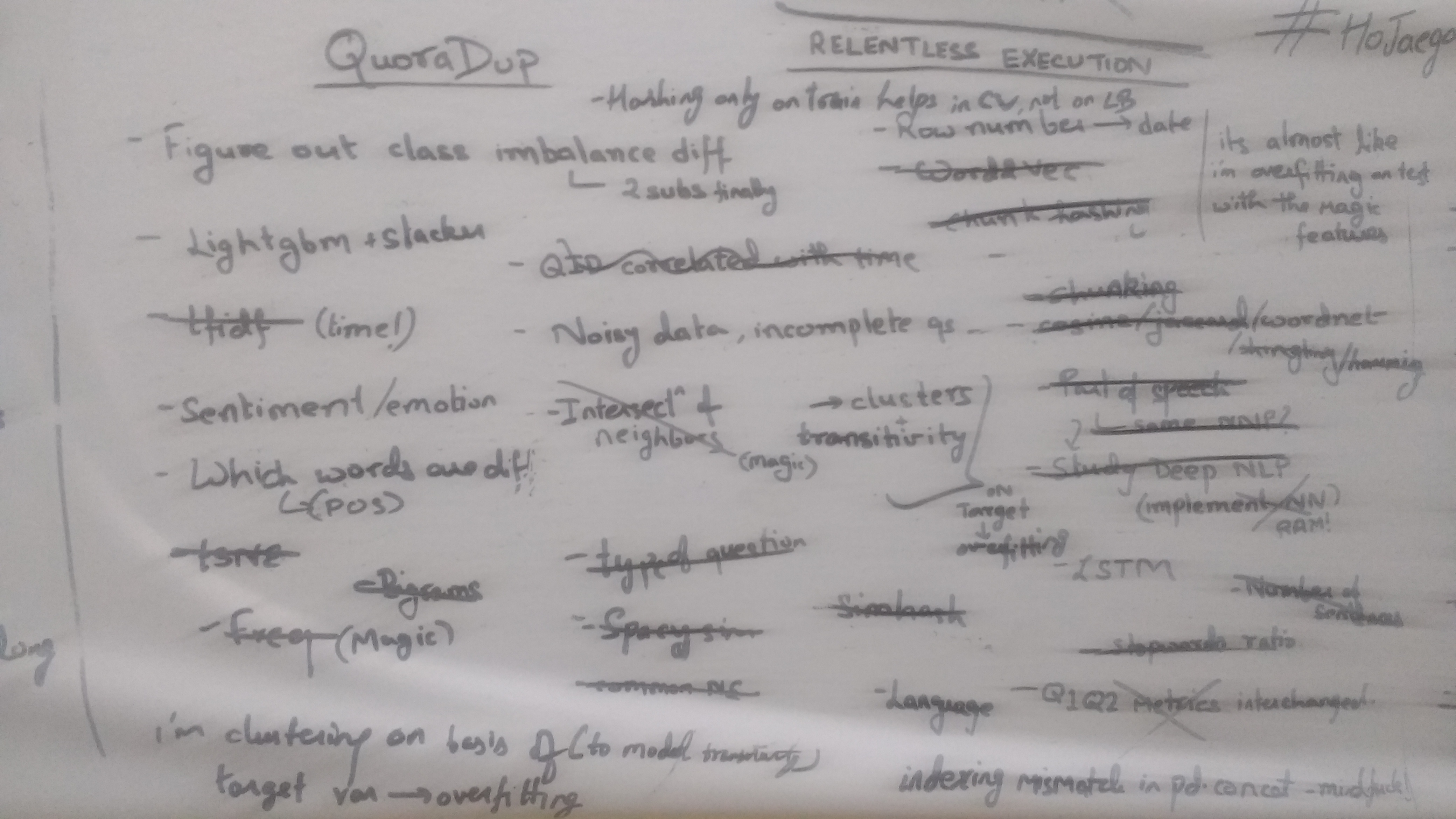 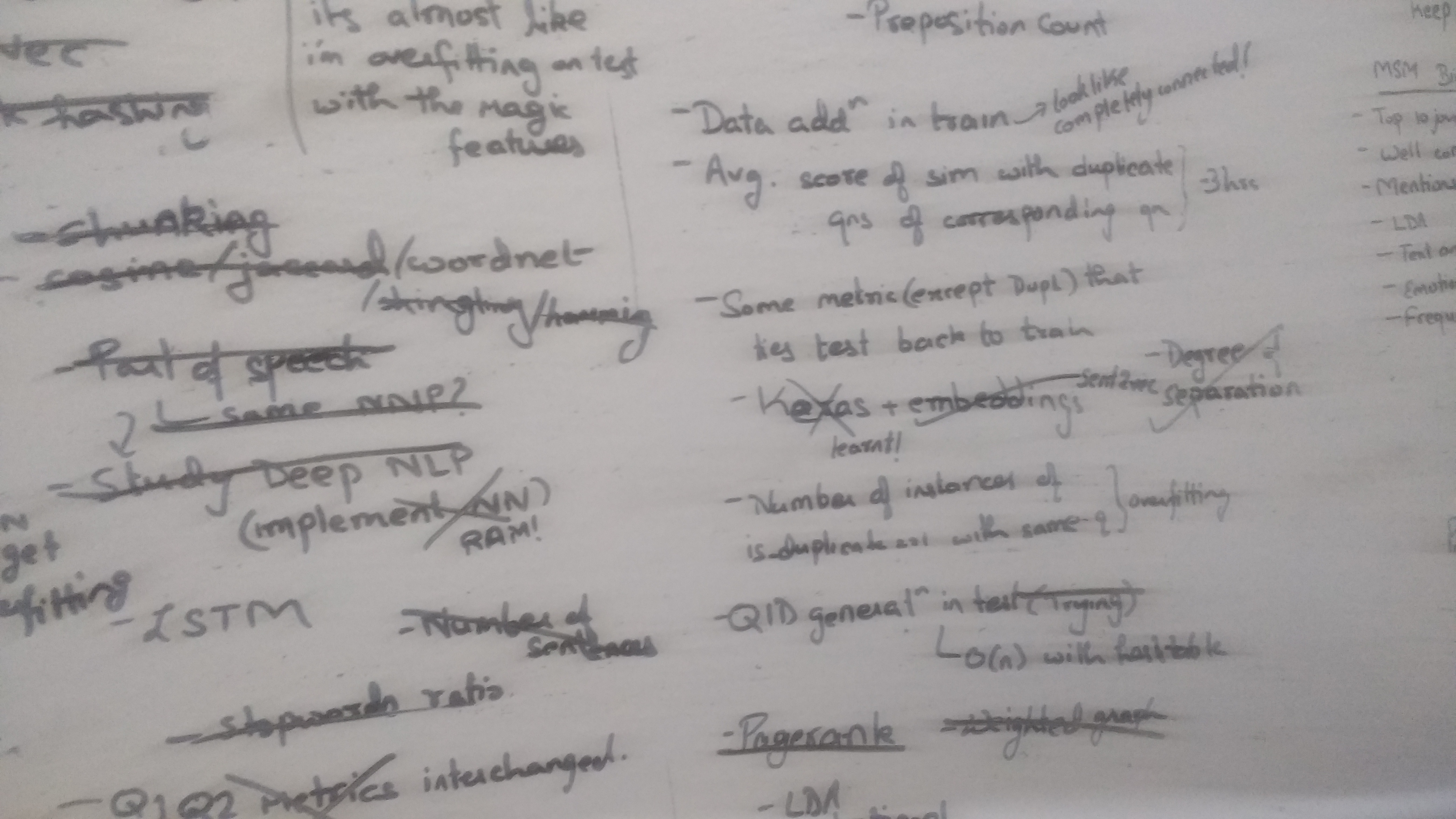 When a noob like me dives head-first into kaggling big-time, there are bound to be fuckups. Even though i make a conscious effort to keep my pipeline modular and version-controlled, i lost almost a weekend’s worth of work because of a nasty bug in my pipelining. Learning it the hard way, i git reverted and remodelled the pipeline on an ipython notebook. A major challenge that i faced when building features was writing memory-efficient code and not rebuilding previous features, modularity was key. This led to another fuckup - since i couldn’t handle the whole of my testing dataset in my RAM, i was breaking it into six subsets and building features iteratively. This meant i was doing a pandas concat between the older dataframe with the new feature, little did i concentrate on indexing :( Spent more than a couple days scratching my head at all NaN features. Noob mistake.

The QID Conundrum – The training dataset had an ID for every question, thus a QID1 and QID2 in every row. However, this wasn’t the case with the testing dataset which meant “QID” couldn’t be used as a feature straightaway. A fellow kaggler released an incredibly creative observation of the decreasing average duplicate ratio(rolling mean) with increasing QID – Mostprobably an indication of Quora’s improving algorithm with time, thus reducing the number of duplicate questions with increasing ID. This inference is based on the assumption that the QID values aren’t masked and are truly representative of time of posting the question. To model QIDs in our testing dataset, i had a hashtable which mapped question texts to QIDs. Now iterating over all questions in test_df – If i encountered an existent question, the corresponding QID was assigned to it. Else we assumed that this was a new question in order of time of posting, incrementing QID by 1. This led to various features like QID difference, mean QID, min QID with the hope of modelling the decrease of duplicacy over time.

Class Imbalance – A major part of discussions were centered around guesstimating the class split in the testing dataframe, which wasn’t clearly similar to the testing split. The mathy folks figured a narrow range of the split via a couple of constant valued submissions, here and here. There were around 34% positive duplicates in the training set, while the testing set had an estimated 16%-17% positive duplicates – Probably a result of the improved Quora algorithm or a result of the computer-generated question pairs. Anyway, a misrepresentative training dataset wasn’t going to help matters – people came up with oversampling solutions(duplicating the negative rows in training), or rescaled their predictions by an appropriate factor. 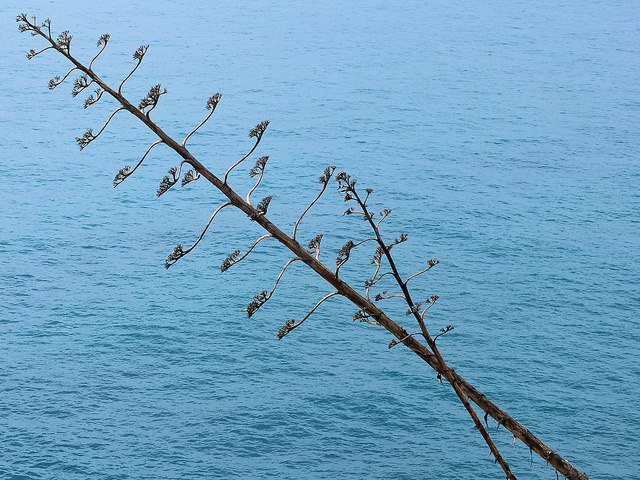 Very embarassed to admit, but my submission was just a single model solution, a 2000-round xgboost. To be fair, i didn’t spend a lot of time on parameter tuning or building diverse models, left it for too late. I tried the default random forest and GBM, not to a better effect than XGB. Stacking and ensembling were in the roadmap too, but that just stayed there :(

Instead, i spent a very long weekend at learning Keras and building dense neural nets – ‘twas my first time! Went through understanding various hyperparameters and ideal architectures, the theory behind activation functions, dropout layers and optimizers! Very interesting stuff! I played around with my a two-layer sigmoid neural net with my 70 features tuning it to perfection, it never came close to the xgboost though. As i mentioned earlier, i couldn’t build embedding layers or LSTMs with my hardware, that would’ve definitely helped. Soon.

Proud of my modelling pipeline though, didn’t have to fret over making a function for every model– will be helpful when i build hundreds of models to stack. Soon.

Top Solutions – Post-competition writeups of the gold medalists just makes me feel like a complete noob! I have to really up my game, and work harder to get up there, the bronze isn’t far away! Some of the major learnings from winners’ solutions:

Conclusions: My primary takeaways from the competition:

So yeah, that’s that. One competition ends, another begins. Kaggle is addictive!