Post-placements, me and three of my college friends decided to go out on a long-pending trip. Dharamsala was an obvious choice, the HPCA stadium had been on my to-do list for so long! 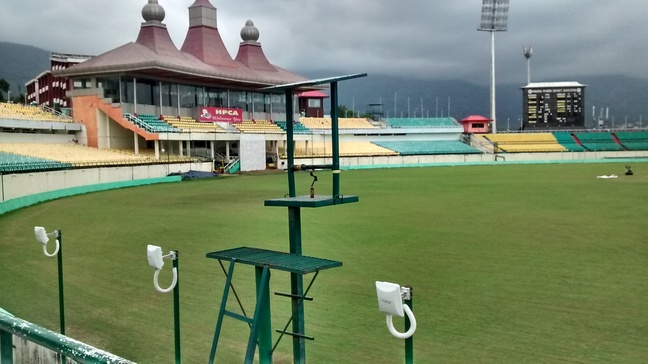 We took an overnight 11-hour bus from Delhi at around 10:30 in the P.M. The route was pretty much a sleepy blur to me, interrupted by quite a few GTA-inspired turns by the driver. We reached Dharamsala in the morning and took a local bus to the McLeod Square, greeted by a film shoot happening bang in the middle!

In search of breakfast, we reached Moonpeak Cafe, a pretty good cafe that was! I had some banana porridge, apple juice and left in the hunt for a decent hotel room up into the hills. After about an hour of exploring and hotel-hunting, we decided upon Silver Moon House, very close to the Bhagsu falls. If you’re thinking of staying up there, be prepared for a 100 calorie workout just to get there. 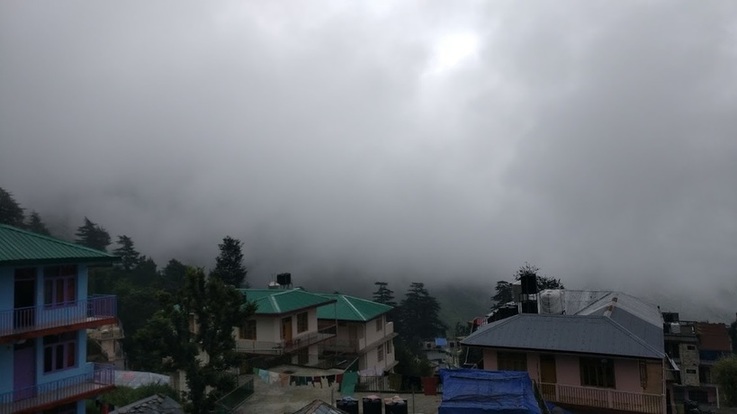 Later in the evening, we took off for the Bhagsu Nag waterfalls, one of the more beautiful falls I’ve seen! The mountain peaks on both sides felt majestic and special! 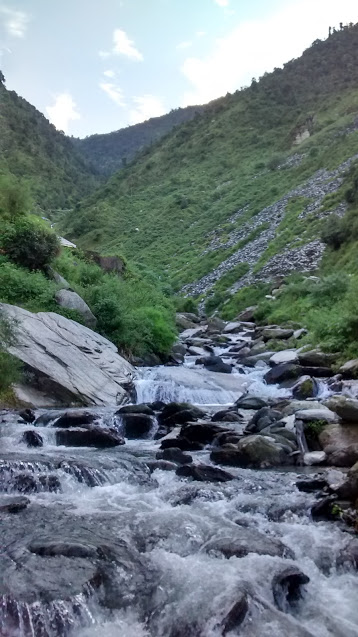 Then, we climbed up till the ‘No Name Cafe’ and had Maggi on the rocks. Very close to the falls, you’ll find a public Swimming Pool(the water is freezing cold!) – I could feel myself shivering even after completing 2-3 rounds of freestyle across the pool. Since we didn’t carry any cameras, I decided to come back again early morning and record some footage. I had some pasta and salad for dinner at a Japanese-ish restaurant – Singh’s Corner on the Bhagsu Square.

I took off on the Bhagsu Falls adventure at 7 in the morning, and it was even prettier this time! There wasn’t a single soul visible, save some Buddhist monks doing yoga on the hills. I climbed up as far as I could go, without putting the camera at risk! 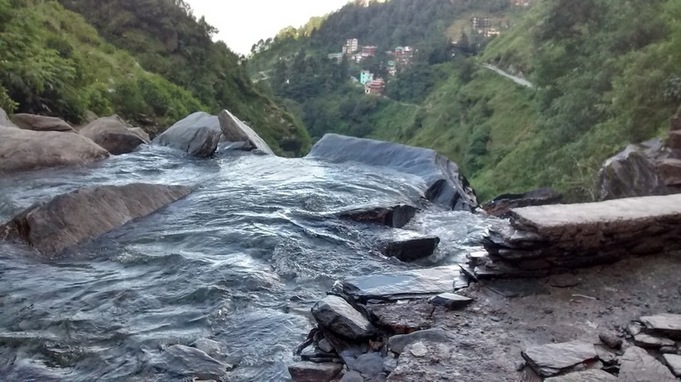 We checked out of our hotel and visited the Tibetan Museum Complex – a quiet and simple monastery. We learnt that Dalai Lama comes here every year for a 5-day stay! Incredible! We also had traditional lunch at the Tibet Kitchen on the McLeod Square – I really like Tibetan food. The Thupka was great, and so was their Jasmine Tea. 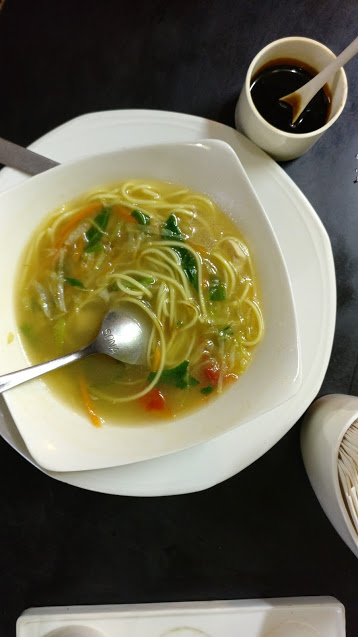 “Free Tibet” is a very strong movement that runs in the hills and should be encouraged by all of us. I felt lacking in my knowledge of Tibetan culture and traditions.

In the afternoon, we embarked on a hike up into the Dhauladhar Ranges - The Triund Trek. If you can do a medium-level trek and fancy double rainbows, incredible sunsets, snow-capped mountain ranges or cute dogs(!), this trek should definitely be on your list! It was a 6km route, wherein the altitude rose from 2000m to 2800m. We completed the trek in around 3 and a half hours, with 11 checkpoints in between – you’ll also find a lot of fellow trekkers on the trail, which is as much as fun as the climb! 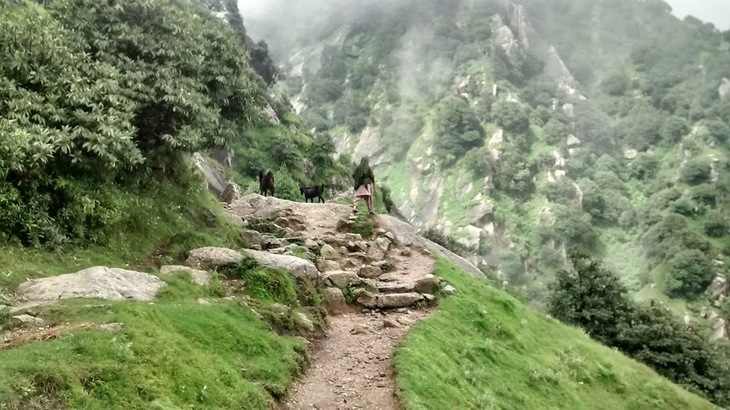 We hired a tent for four, and spent the rest of the evening talking to travellers and roaming around. Since it was slightly rainy, we were able to view a double rainbow in its full glory – one of the highlights of the trip! There were horses, cattle and really cute dogs to accompany us through the slightly scary night (there is no electricity or network!). 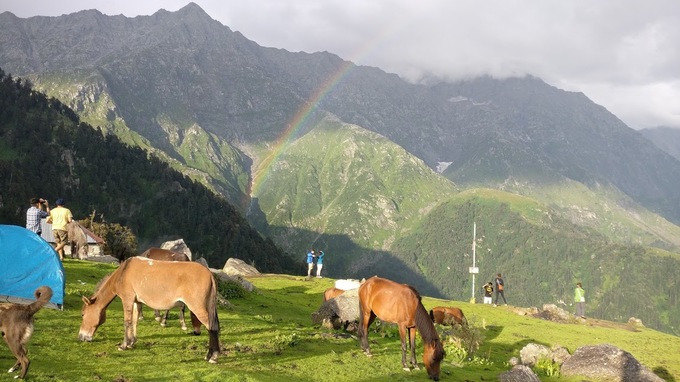 Post a rather ‘close’ night in the tent, we woke up early morning to a breathtaking view off the cliffs. Since the sky had cleared, the whole city of Dharamsala was visible, and so was the Indrahal pass which led to Manali. We had some coffee at the stalls, and began our return trek at 9 A.M. 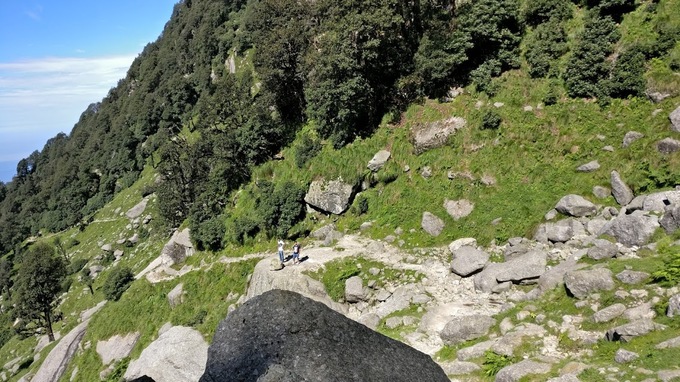 Naturally, downwards was a lot less tiring, we completed it in two and a half hours. You can also take a nice bath at the waterfalls on the way – these falls would later converge into the Bhagsu Falls!

We stopped for a cafe break at Woeser Bakery, where I had some herbal green tea. If you’re into desserts or Tibetan beverages, this cafe is a must-visit! The afternoon was dedicated to the smallest and most beautiful cricket stadium in the world – truly remarkable! We later skateboarded on the stands to get a few timelapses!

Killing time was on the agenda, as our Volvo to Delhi was two hours later. El-Classico Coffee, 200 metres from the stadium, is a cool cafe to chill out. Later in the evening, Dharamsala ISBT was taken over by skateboarding enthusiasts, learning and falling over! The volvo back to Delhi was just incredible, credits to a Sunny Deol film we watched! 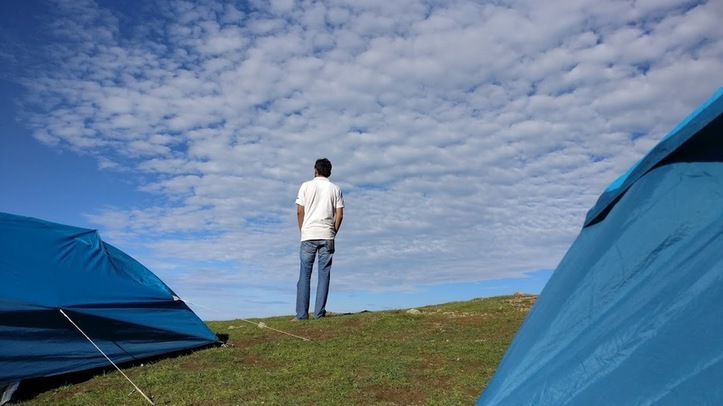 Cheers to more such trips…Later folks!